‘The Dark Divide’ chronicles the process of taking flight

Launching a new endeavor can be a daunting prospect, especially if we lack the practical experience and know-how for proceeding. However, if we’re to elevate our knowledge, wisdom and insights to new heights, we must take the initiative at some point to pursue the goal in question. The rewards of doing so can be immeasurable, enabling us to become experts in our fields that mere study from a distance alone cannot accomplish. Such was the case for a scientist who upped his game with a bold undertaking, an experience chronicled in the new, fact-based wilderness saga, “The Dark Divide.”

When lepidopterist Dr. Robert Pyle (David Cross) initially contemplates a field study to find uncatalogued and endangered species of butterflies and moths in Washington’s Gifford Pinchot National Forest – one of the most remote and undeveloped wildlife areas in the nation – he’s torn about what to do. As much as he would like to make the journey, he’s guilt-ridden about leaving behind his wife, Thea (Debra Messing), who’s courageously but unsuccessfully battling ovarian cancer. Despite her illness, however, she urges him to pursue his dream, to get away from the stress of caring for her, which she can see is clearly taking a toll on him.

In making plans for the project, though, it becomes apparent that he’s woefully unprepared for the trip to the foreboding territory that even locals look upon with a healthy respect, calling the area “the Dark Divide.” He’s basically a neophyte when it comes to camping, and he has virtually no wilderness experience for dealing with things like the elements, bears and lack of a support network. Two of his professorial colleagues (Shelly Lipkin, Tom Doupe) pointedly remind him of this, too, asking him if he’s truly ready for what he’ll be up against. Then there’s Thea’s worsening condition, which prompts Robert to reconsider this undertaking – that is, until she makes the decision for him. And, with the subsequent awarding of a prestigious research grant not long after her passing, the deal is sealed for the intrepid professor to go butterfly hunting.

Now on his own, Robert embarks on his journey in almost Quixotic fashion, not knowing what to expect – and even less prepared for knowing how to respond. He initially experiences some significant stumbles, like losing his butterfly net (being left without it thus providing a fitting metaphor for the state of his life at the time). He also makes some beginning hiker’s mistakes, like starting out on his journey with a pair of boots that aren’t already broken in. Nevertheless, despite these foibles, he seems to adapt to his new surroundings reasonably well, even if not always as planned or hoped for.

Robert indeed accomplishes what he set out to do, discovering a number of new butterfly and moth species. But, more importantly, the trip provides him with an opportunity to reflect upon his life with his beloved (told through a series of flashbacks) and how to get on without her. He takes time to look inward, introspectively assessing who he is and finding himself growing in ways he likely never imagined. It’s as if he’s going through a metamorphosis of his own, finally getting a chance to do for himself what his lepidopteran companions innately consider second nature. He gains a new appreciation for his winged subjects, at last growing his own airworthy appendages as he seeks to symbolically take flight in his own unique way. 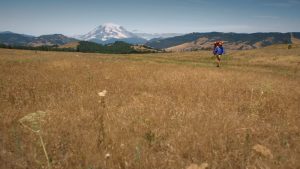 Washington’s remote Gifford Pinchot National Forest, one of the most undeveloped wilderness areas in the nation, provides the backdrop for Professor Robert Pyle (David Cross) in his search for new butterfly and moth species in director Tom Putnam’s “The Dark Divide,” now available for streaming online. Photo courtesy of The Dark Divide/Public House Films.

Mind you, even though Robert is by himself much of the time, he’s by no means alone. He encounters an array of colorful characters along the way, all of whom help contribute to his personal growth and development, including a skeptical supply store clerk (Carmen Esposito) who questions the wisdom of Robert’s venture, a Girl Scout troop more accustomed to wilderness ways than he is, and a disgruntled logging crew chief (Gary Farmer) who despises the local “tree huggers,” prompting the professor to keep mum about his preservationist leanings. He also comes upon evidence of phenomena outside his everyday experience, such as an oversized footprint that local Native Americans (Kimberly Guerrero, Dyami Thomas, Harvest Moon) matter-of-factly recognize as a hallmark of Bigfoot, a being they’re convinced is absolutely real, a contention that challenges (and helps to reframe) Robert’s iron-clad scientific worldview.

The further Robert journeys, the more “primal” his odyssey becomes. He strips away everything but the bare essentials both literally and figuratively, forcing him to come face to face with himself and his life. He ends up crawling through a lava tube clad only in his underwear, a painful experience that signifies his own rebirth. It’s an ordeal he manages to survive – and pushes him to ask himself, “What do I want for my new life?” It’s a question that only he can answer, but at least he recognizes the opportunity it affords, something we should all be so fortunate enough to experience and take advantage of when it presents itself.

It’s somewhat ironic how we can become so-called experts in a particular area purely on an intellectual level without ever engaging in firsthand practical experiences with our subject matter. Robert, for example, is quite knowledgeable about the study of lepidoptery, but he appears to have done most of his work in classrooms and laboratories; he’s never really engaged in the hands-on field work that allows him to know what it’s like to be the subjects he’s studying. When his life is turned upside-down, though, there’s nothing to hold him back from doing so, and so he plans to proceed with an undertaking to find out for himself.

Thea Pyle (Debra Messing), the supportive spouse of an acclaimed lepidopterist, encourages him to go butterfly hunting in the wilderness to give him a break from the ongoing care he provides her in her battle against ovarian cancer in the new fact-based saga, “The Dark Divide.” Photo courtesy of The Dark Divide/Public House Films.

For whatever reason, Robert has not pursued such a venture before. Now, however, with his other obligations fulfilled, he has an opportunity to make it happen. He thus sets in motion the process of setting up his field study, and, as the elements fall into place, he’s able to proceed. The reason those project components come together is because he now believes he can pull this off, despite his obvious lack of practical experience. Those beliefs, in turn, draw the resources to him that he needs (such as the study grant), a prime example of conscious creation (also known as the law of attraction) at work, the philosophy that maintains we tap into our thoughts, beliefs and intents to manifest the reality we experience – even if it means taking us into highly uncharted territory.

Like the butterfly that morphs into its celebrated form from that of a mere caterpillar, Robert is about to do the same on his journey, even if he’s not entirely sure of how – or that – it’s going to happen. Fortunately for him, he experiences a number of synchronicities – those perfectly attuned “coincidences” that seemingly appear out of the blue just when we need them to provide us with exactly what we need at the moment. They enable his odyssey to unfold, taking him to where he needs to go, even if he doesn’t always know it at the time.

In the process, this allows Robert to rewrite his beliefs as a means to reshape his existence. He considers possibilities he hadn’t thought of before, especially in the area of expanding beyond established limitations. For instance, his encounter with evidence of Bigfoot – and its apparent validation by the Native Americans he meets – prompts the diehard scientist to think in terms he may have never previously contemplated. In fact, the real world counterpart of this fictionalized version of himself has since added study of this legendary cryptid to his work as a butterfly expert, quite a remarkable change indeed.

It’s interesting to see how Robert goes about this, too. In many respects, he approaches this endeavor with a sense of playfulness, allowing his inner goofball to emerge. Some may question the wisdom of this given the conditions of the quest he’s embarking upon. In fact, there are some situations that truly place him in peril, yet he doesn’t unduly panic (at least most of the time). He goes with the experience, because that’s what he’s drawn to him, something that he apparently recognizes on some level is meant to provide him with a necessary learning opportunity. Such circumstances give him a chance to expand his life experience and to learn certain life lessons, all of which contribute to the ongoing unfolding of his personal growth, development and metamorphosis – again, just like the winged subjects he studies. 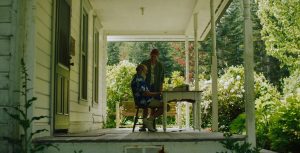 Loving partners Robert Pyle (David Cross, seated) and his wife, Thea (Debra Messing, standing), struggle to work through the dilemma of battling a devastating illness while trying to maintain a semblance of normality in “The Dark Divide.” Photo courtesy of The Dark Divide/Public House Films.

The upshot of this is that it allows Robert to go through a personal evolution and rebirth. And, in light of what he underwent prior to taking on this challenge, he’s in need of reinventing himself, of becoming Robert without Thea. Given how much he loved and cared for his wife, her death was a tremendous loss. But, in the wake of her transition, he’s still here and needs to build a new future for himself – something he can only do by reframing his destiny, an opportunity made possible by shifting his beliefs and the manifestations they enable.

Thanks to this experience, Robert comes to understand the conscious creation concept that everything is in a constant state of becoming, again mirroring the existence of the butterfly. And, also like the butterfly, it enables him to learn how to take flight, to spread his wings and truly soar in ways he never dreamed imaginable. That’s quite an aspiration – especially when one sees it fulfilled.

Filmmaker Tom Putnam’s fact-based chronicle of Dr. Robert Pyle’s odyssey encompasses a range of emotions, from laughter to tears to revelation, a picture whose story line particulars parallel films like “Wild” (2014). The professor’s experience in discovering himself while working through profound grief is inspiring and cathartic, qualities that many of us may find easy to appreciate. Though somewhat episodic at times, the overall narrative rings true to its mission and does so with whimsical humor, beautiful cinematography and an excellent score. Its greatest strength, however, lies in its performances, with Cross and Messing (who is barely recognizable here) easily turning in the best work of their careers. The film has been playing the festival circuit and had a brief theatrical run before becoming available for online streaming on a number of internet platforms. 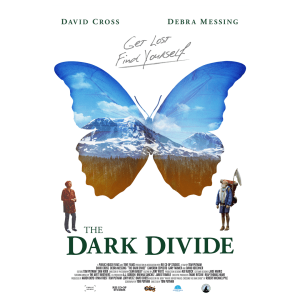 There comes a point in many of our lives when we’re faced with the choice of stretching or stagnating. The implications of each are often quite clear, too. But, even with that knowledge, we must take action – or purposely choose not to do so – to see them materialized. Making the decision and subsequently acting upon it may be challenging, even difficult. However, if we’re to move forward and realize advances in our lives, we must choose to forge ahead to see what grand opportunities await us – and avoiding regrets that we never chose to pursue them.