‘Victoria and Abdul’ celebrates the power and beauty of friendship

Friendships are one of the most precious, enjoyable and special elements of life. They’re especially prized when they take on magical qualities, those that involve acquaintances who are seemingly unlikely, perhaps even mismatched. So it was when a humble Indian servant met a powerful but lonely, aging monarch trapped by the rigidity and responsibility of her title, a fable-like tale depicted in the new biographical offering, “Victoria and Abdul.”

When Abdul Karim (Ali Fazal), a clerk at a local prison in Agra, India, is unexpectedly called upon to present a ceremonial coin to long-serving Queen Victoria of England (Judi Dench), he’s both intimidated and overwhelmed at the prospect. Having been chosen largely because he meets the physical requirements dictated by royal protocol, he’s plucked out of his civil servant job and whisked off to London with his new friend and cohort, Mohammed (Adeel Akhtar), for what is supposed to be a short trip and an even shorter ceremony.

In preparation for his task, Abdul is rigorously schooled in what’s expected of him, most notably what he should and should not do. In particular, he’s repeatedly advised never to make eye contact with Her Majesty. However, when the two meet – and the unthinkable serendipitous gaze transpires – a connection is made, one that blossoms into a solid bond of familiarity and, eventually, friendship.

As the relationship between Abdul and Victoria unfolds, she’s captivated by his wisdom and charm. He teaches her things about life and culture in his homeland that she never knew – quite an irony given that, in addition to being Queen, she also bears the title of Empress of India, a land she rules but has never visited. In short order, Abdul begins teaching Victoria about the Koran and the linguistics of Urdu, among other subjects, all of which fascinate her. And, as a consequence, Abdul quickly becomes one of the Queen’s most trusted confidantes.

Victoria’s acquaintance with Abdul involves more than just being a student of subcontinent culture. He also provides good company, something she craves, given the demands of her title, the incessant obsequious posturing of her family and staff, and her profound loneliness. Having outlived the two great loves of her life, as well as many others who were special to her, she feels alone, and Abdul fills a huge void in her day-to-day existence. 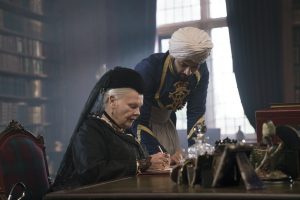 However, despite Victoria’s comfort with her new friend, others don’t share her sentiments, most notably her eldest son and heir apparent, Bertie, Prince of Wales (Eddie Izzard), Prime Minister Lord Salisbury (Michael Gambon), and members of the royal household, including chief of staff Sir Henry Ponsonby (Tim Pigott-Smith), primary physician Dr. Reid (Paul Higgins), and house matrons Lady Churchill (Olivia Williams) and Miss Phipps (Fenella Woolgar). All of them look down upon the “unseemly” commoner, convinced that he’s gaining too much influence with Her Majesty. They fear for their standing with the Queen, but they also express concern that a foreigner – and a Muslim one at that – may be somehow trying to co-opt the leader of the British Empire and the Church of England. They’re convinced that something must be done – before it’s too late. However, they also underestimate the power of their adversary – and I’m not talking about Abdul.

In light of this (and many other instances, both on- and off-screen), there’s no denying that Victoria was a formidable woman, one fully comfortable in her own skin, as well as her own sense of personal empowerment. Having been the world’s longest-serving monarch at the time, with roughly a billion citizens under her charge, Victoria was clearly in her element when it came to her circumstances. She wielded her power confidently and had grown completely comfortable to getting her way.

This is undeniable proof of someone in command of her conscious creation skills, the means by which we manifest the reality we experience through the power of our thoughts, beliefs and intents. Even if Victoria had never heard the term or studied the philosophy, she was nevertheless a natural at it, as evidenced by her impressive accomplishments both on and off the throne.

Yet, even with all her aptitude at this, Victoria still faced her share of challenges, perhaps to test herself to keep her conscious creation skills in top form. For example, she routinely drew to herself circumstances where she had assorted cronies nipping at her heels, proposing schemes and attempting at manipulate her decisions in ways that served their own positions while claiming that they were merely making recommendations in her best interests. For her part, though, Victoria readily saw through these ruses aimed at undermining her authority and diluting her power and never hesitated to dress down the upstarts behind such ploys. She firmly held onto her personal power whenever it was challenged. Such discernment skills proved a saving grace on many an occasion and made her a more effective conscious creator in the long run. 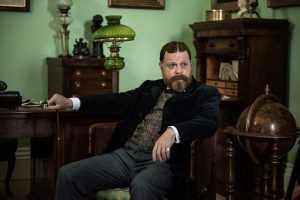 Bertie, Prince of Wales (Eddie Izzard), heir apparent to the English throne, seethes over the profound friendship between his mother the queen and a commoner in the entertaining new comedy-drama, “Victoria and Abdul.” Photo by Peter Mountain, courtesy of Focus Features.

This became particularly problematic for Victoria when it came to her personal life. One could argue that such scenarios are understandable in matters of state, but, when it came to unofficial capacities, that was something clearly in her own interest and control, and those who attempted to interfere with it did so at their peril. When the royal family and members of the household staff began to question Her Majesty’s friendship with Abdul, for example, Victoria never hesitated to rise to the occasion to slap them back and assert her own discretion. But, then, given her effectiveness as a conscious creator, she had the power and conviction of her beliefs behind her to realize the outcomes she chose for herself.

Such capabilities even went into the creation of her relationship with Abdul in the first place. As someone who was constantly beset by those pushing agendas and seeking to advance their own circumstances, and as someone who lost so many whom she so dearly loved, Victoria was lonely and craved the company of someone authentic. That’s where Abdul came into play, and, fortunately for the Queen, she managed to forge the beliefs that successfully drew someone like him into her life. He was just what she needed, and she relished the time she spent in his company.

Whether or not Victoria knew about conscious creation, it’s interesting to note that, despite her seemingly rigid, unfeeling exterior, she had a strong interest in spiritual and metaphysical matters. This is apparent through her success at drawing Abdul into her life. As someone who was well-versed spiritually, Abdul introduced Victoria to religious concepts she had never before considered, broadening both her worldview and that of the wider world of reality. For someone who was responsible for leading one of the planet’s largest religious institutions, it was no doubt in her best interests to keep an open mind about all things spiritual to rule such an organization effectively – even if others didn’t share the same view. Abdul provided the perfect mentorship, and she never hesitated to avail herself of his wisdom.

For his part, Abdul obviously had an impressive command over his conscious creation skills, too. As someone who firmly believed in being of service to others, he manifested circumstances where he could fulfill this mission in a grand way and by someone who sincerely appreciated his efforts. That’s quite a creation as well, one that we should all hope to emulate.

In spite of the many pressures placed upon them, the Queen and her youthful mentor collectively materialized what many would see as an enviable friendship. It had an undeniable harmony and intimacy associated with it, qualities that successfully helped it withstand all attempts at trying to undermine it. Even during times when the bond was threatened – sometimes with seemingly credible evidence worthy of raising legitimate suspicion – the connection managed to endure, thanks in large part to the underlying beliefs that manifested it in the first place. Now that’s the test of a real relationship and what it truly means to call someone “friend.” 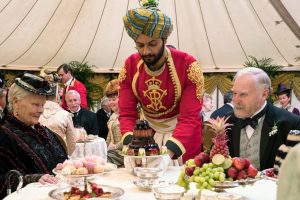 Though somewhat slight in substance and likely tinged with more than a little present-day political correctness, “Victoria and Abdul” nevertheless serves up an eminently entertaining story about the forging of a bond between unlikely companions. Director Stephen Frears’s breezy, endearing tale features top-shelf production values and gorgeous cinematography, capped off by delightful portrayals by Dench and Fazal in the title roles. It makes for a package that’s sweet, funny and thoroughly enjoyable, even if a bit suspect historically speaking.

All too often we take friendships for granted, not fully appreciating what they mean to us and how truly valuable they really are. That’s sad, especially when we see those who desperately reach out to forge such connections when they’re absent. Fortunately, we have the example of this improbable duo to help show us the way. Should we follow their lead, we just might find ourselves sufficiently amused.