‘A Man Called Ove’ explores our purpose in life

When we get on in years, we may feel like we lose our purpose for living, especially if the things we hold most dear – like our jobs and significant others – are no longer part of our lives. It may even prompt many of us to contemplate whether we want to consider carrying on. That’s the dilemma faced by a curmudgeonly 59-year-old who wonders whether life is still worth it as seen in the delightful new Swedish comedy, “A Man Called Ove” (“En man som heter Ove”), now playing in limited release and soon to be available on DVD, Blu-ray disk and video on demand.

Ove Lindahl (Rolf Lassgård) has grown increasingly dissatisfied with his life. As the former head of his local homeowners’ association, he’s embittered at having lost his power, yet he still feels compelled to do daily rounds of the community to check for compliance with the organization’s rules, a frustrating exercise that perpetually reinforces his opinion of his neighbors as idiots. But, if that weren’t bad enough, he next learns he’s being squeezed out of his job of 43 years, a casualty of the rise of technology. And, on top of all that, he wrestles with his grief over the loss of his beloved wife, Sonja (Ida Engvoll), the only person he’s convinced ever gave him any joy in his life. 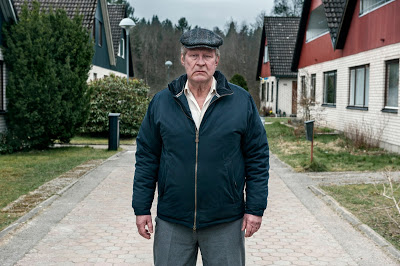 Ove Lindahl (Rolf Lassgård), a cantankerous widower who’s recently lost his job and his standing as head of the local homeowners’ association, contemplates whether he wants to carry on with his life in the delightful new Swedish comedy, “A Man Called Ove” (“En man som heter Ove”). Photo courtesy of Music Box Films.

With everything seemingly working against him, Ove believes that maybe it’s time he joined Sonja. He methodically begins wrapping up his affairs in anticipation of committing suicide. But, when the big moment comes, he’s distracted by a ruckus outside his home, one that clearly involves multiple violations of homeowner association rules. He resolves that he can’t possibly kill himself until he sets to right the impertinent scofflaws, his new neighbors, Patrik (Tobias Almborg), Parvaneh (Bahar Pars) and their two children, Sepideh (Nelly Jamarani) and Nasanin (Zozan Akgün).

Once Ove doles out one of his signature tongue lashings, he returns home to follow through on his suicidal intent. However, once again, he’s interrupted, an occurrence that subsequently happens repeatedly each time he tries to do himself in. Whether it’s helping his wheelchair-bound neighbor Rune (Börge Lundberg), a young gay man kicked out by his close-minded family (Poyan Karimi), his pudgy young neighbor (Klas Wiljegård) or even a stray, largely ungrateful cat, Ove never gets to follow through on his objective.

Interestingly, though, each time Ove tries his hand at suicide, he begins looking back on his life as a child (Viktor Baagøe) and as a younger man (Filip Berg). Through these visionary experiences, Ove gets to see the purpose he’s served in the lives of others throughout the years, something that he feels he’s lost all these decades later. However, as his experiences with his needy neighbors show, Ove obviously still fills a need in the lives of others. All he need do is recognize this, provided he’ll allow himself to do so. 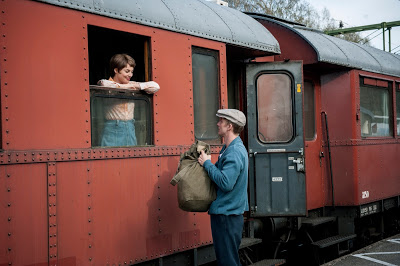 All of us like to feel needed in our own way. Unfortunately, as we age, many of us may begin to feel that taken away from us, either by the ravages of time or decisions of others. If we buy into a belief that we lack usefulness, circumstances reflecting that notion may begin to materialize, and the more we embrace them (unwittingly or otherwise), the more they’ll begin to take on a life of their own. That’s not exactly how most of us would probably want to spend our remaining years.

Beliefs, as we all know, are powerful things, and they play an integral role in the conscious creation process, the means by which we create the reality we experience. This applies regardless of the nature of the beliefs, too, for better or worse. If we believe we serve a purpose in life, one will emerge to comply with the intent that spawned it. However, if we buy into a contrary notion, a comparable result will arise in line with its instigating belief.

Given the developments in Ove’s life, he’s begun buying into the idea that he no longer serves a purpose, that maybe he’d be better off in the company of his dear, departed Sonja. But does he really believe this? Again, as Ove’s recollections of his life pass before his eyes during his attempted suicides, he sees that he has always played an important part in the lives of others. When his mother died when he was a child, for instance, Ove became a constant help and companion to his lonely father (Stefan Gödicke). Later, after he and Sonja married and moved into their residential community, he became head of the homeowners’ organization, assuring that everyone abided by the rules and verifying that everything was shipshape, efforts that were a big help to his fellow association head, Rune in the days before he became wheelchair-bound (Simeon Lindgren).

But now that conditions in Ove’s life have changed, he’s begun to doubt his usefulness. That’s important to recognize, given that doubt – which is a belief in itself – is one of the key ways we can significantly undercut our manifestation efforts. However, just because conditions have changed somewhat, does this mean that they’ve changed completely? Is it really a case of all or nothing? Ove might think so, but that need not be the case, and, on some level, even he doesn’t believe so. If he did, then one of his attempted suicides surely would have succeeded. And, since none of them did, then obviously it’s not Ove’s time to check out.

Just because our circumstances have changed doesn’t mean we need abandon our aspirations (or their underlying beliefs). Perhaps we need only make adjustments, which, in Ove’s case, would be entirely understandable. For instance, since Ove’s now an older man, one whose physical condition isn’t what it once was, perhaps he needs to slow down a bit, to relinquish some of what he believes to be his sole responsibilities. But that doesn’t mean he needs to give up on everything he’s accustomed to doing. He must believe that to some degree, too, especially when he willingly gives up on killing himself to help out others on so many occasions. In that sense, then, learning how to alter our beliefs to make them more manageable rather than discarding them totally may be the wiser course to pursue. 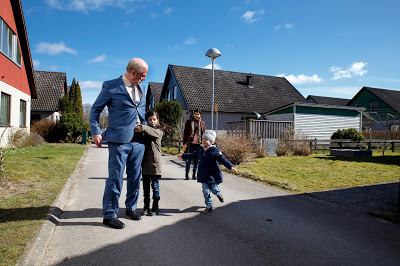 As demonstrated in this film and others like it, such as “The Best Exotic Marigold Hotel” (2011) and its sequel (2015), it’s never too late to contribute to life, no matter how much we may have allowed ourselves to believe otherwise. When we recognize that we still have a purpose, we can formulate beliefs that allow us to satisfy it. In conscious creation terms this is known as our value fulfillment, the act of living our lives as our best, truest selves for our own benefit and that of others. Despite his notions to the contrary, Ove still has value fulfillment to live out, and it would benefit both him and others to see that through while he’s still able to do so.

“A Man Called Ove” is a quirky, bittersweet comedy that takes a little time to find traction, and it waxes more than a little melodramatic on occasion. However, its clever storytelling, fine performances, offbeat humor and charming narrative make up for some of its formulaic shortcomings. It’s a touching, fun-filled matinee offering, one that’s sure to lift us out of the doldrums when they seem to be closing in on us.

Ove’s experience shows us what it means to feel needed, to have a purpose in life. His story serves as a valuable cautionary tale to those who believe they no longer have a place in the world. Many of us contribute more than we realize; if only we’d open our eyes and take a good, hard look at our existence and the role we play. It’s hard to imagine fewer things ultimately more fulfilling than that.